Eating a healthy diet is always recommended to get in shape and stay fit. But did you know that food can also be medicine? Take mushrooms for example. Read the excerpts from an article by Dr. Mercola about mushrooms and HPV.

In one study, for example, eating one or two servings of dried shiitake mushrooms daily for 28 days was found to have a beneficial, modulating effect on immune system function.1

Now new research has also revealed that a shiitake mushroom extract may help to eliminate infection with the human papillomavirus (HPV) – a finding that makes perfect sense, since a strong immune system is typically all that is needed to clear up an HPV infection.

The new study, which was presented at the 11th International Conference of the Society for Integrative Oncology, involved a shiitake mushroom extract known as active hexose correlated compound, or AHCC. It’s often sold as a nutritional supplement for boosting immune function.

Ten women with HPV were given the mushroom extract. Three of the women took the extract daily for three months and eliminated the virus completely. They remained clear of HPV even one month later. Two other women taking the extract had declining levels of HPV, so they are continuing to take the substance for up to six months.2

The five remaining women, meanwhile, were assigned to take the extract for less than three months, which proved not long enough to clear the infection. The researchers are hopeful that all of the women will respond after six months of treatment. The study’s lead investigator, Judith Smith, PharmD, told Medscape Medical News:

“Now we know that we need to give it at least 6 months to realize the full effect… This study confirms our preclinical findings, that it can eradicate HPV… We would also like to investigate at some point if AHCC can actually prevent infection, or prevent re-infection… We’d like to see if it can help build up the immune system to the point of resisting infection with HPV.”

Interestingly, Dr. Smith has had inquiries from people asking if the mushroom extract might work to clear up genital warts caused by HPV as well. Since the extract has no side effects, she suggested they could go ahead and try it.

At least several people have confirmed so far that their lesions cleared up and have not returned.3 In addition to immune-boosting effects, shiitake mushrooms also demonstrate antiviral (including HIV, hepatitis, and the “common cold”) activity, which explains why they may be a near-perfect natural treatment for HPV.

The beauty of natural substances like mushrooms is that they typically offer multiple benefits. Shiitake mushroom extract, for instance, is known to have anti-tumor benefits as well. As Dr. Smith noted:4

“I had originally looked into AHCC for its anti-tumor benefits… Then as I learned more about its activity against various virus strains, I connected the dots to my cervical cancer research and HPV and thought of the big picture…

…a nutritional supplement to treat HPV infections would be an incredible, safe option and could easily be used to treat infections before they turn into cancer.”

Shiitake (Lentinula edodes) contain lentinan, the polysaccharide for which it was named. Lentinan has been isolated and used to treat stomach and other cancers due to its antitumor properties.

The compound lentinan in shitake mushrooms has been found to increase the survival rate of cancer patients6
Extracts from maitake mushrooms, when combined with vitamin C, were shown to reduce the growth of bladder cancer cells by 90 percent, as well as kill them7
In Japan the top two forms of alternative medicine used by cancer patients are a mushroom called Agaricus subrufescens and shiitake mushroom extract8
Ganoderic acid in Reishi mushrooms may be useful in treating lung cancer9

Mushrooms are not only capable of bolstering immune function and potentially fighting cancer. Aside from being rich in protein, fiber, vitamin C, B vitamins, calcium, and minerals, mushrooms are excellent sources of antioxidants.

They contain polyphenols and selenium, which are common in the plant world, as well as antioxidants that are unique to mushrooms. One such antioxidant is ergothioneine, which scientists are now beginning to recognize as a “master antioxidant.” Here are four more facts about mushrooms that might surprise you:10

Getting back to HPV, it’s likely that the shiitake extract helped to boost the participants’ immune systems enough to help clear the HPV. It should be noted that in more than 90 percent of cases, your immune system can clear up an HPV infection within two years on its own.

But in the case of the featured study, the researchers specifically looked for persistent infections that did not appear likely to clear on their own. Even in those cases, most of the time HPV persistence was neutralized by the immune-boosting and anti-viral effects of the mushroom extract.

You can certainly try mushroom extract, or simply eating more organically grown mushrooms, to boost your own immune system, but it’s also important to engage in immune-boosting habits, like eating the foods described in my nutrition plan, exercising and optimizing your vitamin D levels.

One of the simplest steps you can take is to eliminate your consumption of sugar and most non-vegetable carbohydrates. The over-abundance of many processed foods in the typical Western diet simultaneously enhance inflammation while muting your immune system’s ability to respond to and ultimately control infections.

Eliminating processed foods from your diet might seem overwhelming, but it doesn’t need to be. Start slowly with this “bite-sized” step: swap out one of your processed-food meals (or even a snack) with homemade fermented foods. You can try a kefir smoothie (blend kefir with frozen berries and, if you like, a couple of organic raw eggs) or a serving of fermented veggies or kimchi. You can find step-by-step instructions to make your own fermented vegetables at home here. Just one-quarter to one-half cup of fermented veggies, eaten with one to three meals per day, can have a dramatically beneficial impact on your health, including that of your immune system. 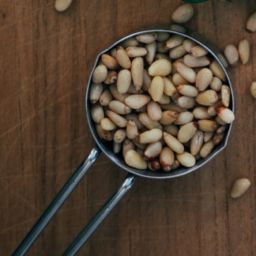 There are many reasons to eat pine nuts, they’re surprisingly good for your health! Pine Nut Benefits: 5 Ways This…